A masked crowd gathers in an unlikely gallery: Mount Road Social in Chennai’s Express Avenue mall. They wander from table to table between refuelling at the bar. The tables display urban, contemporary art in the form of prints, postcards, stickers and comics. This encouraging accessibility is probably what makes Optikal Asylum, a contemporary art show that tours the country, an anticipated event.

For its 21st edition, Optikal Asylum opened in Chennai for the first time with a limited line-up of nine artists. A monthly event that consistently saw a huge turnout (think: over 500 people) since its inception in 2019 in many cities like Mumbai, Bengaluru, Pune and Goa, Optikal Asylum’s Chennai edition had to be in a restricted setting this time.

From automatic drawing and graffiti art to comic illustrations and graphic design, the line-up of up and coming local artists, presented the walk-in crowd with a glimpse of the city’s budding talent. Defying the concept of a gallery, the display invited artists and viewers to interact and discuss their art, in a no-holds-barred, informal atmosphere.

While graffiti artist A-Kill’s photorealistic paintings climbed framed canvases that were on the pricier side, young artists like Nirmal RS and Harini Kannan, chose modest prints, postcards and merchandise priced between ₹180 and ₹300. Everything from automatic drawing to illustrations and graffiti was on display
| Photo Credit:
B Velankanni Raj

One of Nirmal’s cards, inspired by Haruki Murakami’s Killing Commendatore, etches out a scene where the protagonist walks through a street in Nazi-occupied Vienna, on a snowy night. The influences of French illustrator Pascal Campion are hard to miss. Harini’s graphic short story titled Hair Fall, based on her personal struggles with hair loss, is a surrealist take, interspersed with dark humour and grotesque imagery. Displayed among her other work, the graphic novel, which was created on a page-per-hour format for a 24-hour comic challenge, was priced at a modest ₹300.

On the other hand, Felix Jackson, an artist who experiments with automated drawings, mostly of forms that evolve from a single point — “the point being chaos”, presented his sketch notes and work books to viewers, in an attempt to explain his creative process better.

Optikal Asylum as an idea evolved from the barbeque parties that Social had hosted in 2019 in Mumbai. What began as a weekly curation with live music and barbeque gave way to a monthly curation of visual artists where music takes a backseat.

“The first edition went really well with about 500 people turning up. Since then, we have had really big turnouts. Twenty editions later, we have hosted over 250 artists from around the country,” says Romario Rodrigues of Kranti Art Theory, which curates Optikal Asylum, across venues.

For the first few months, Mumbai and Pune remained preferred locations but the show (with mostly, a city-specific line-up) soon travelled to Goa, Bengaluru and other cities. The co-working space and restaurant/pub chain, Social, with 26 branches across the country, has been a long time partner for Optikal Asylum. “Primarily the line-ups have illustrators and graphic designers. We kept it that way because initially when we had started out, there were a lot of visual artists coming up but there wasn’t any monthly property that showcased them,” adds Romario. 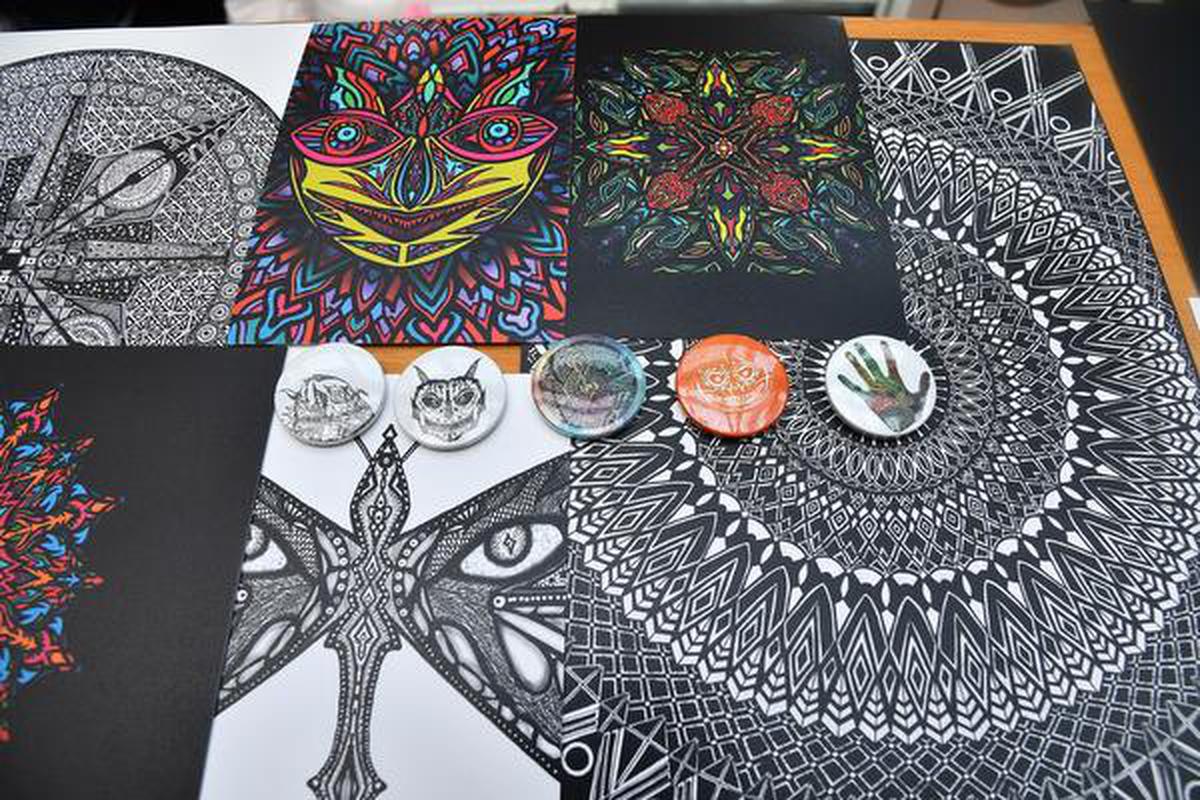 What was common at that point was to find a visual artist positioned in the periphery as a musician (which is the main act) performs. Optikal Asylum seeks to flip this narrative.

“So, we thought, let’s have a bunch of visual artists as the main act and one or two musicians, who would end the night with a party,” says Romario.

From millenial or Gen Z buyers’ point of view, affordable art is on view sans the austerity that comes with being in a gallery space. Prices are also accessible, with prints starting at ₹300 and canvases going up to a few thousands. And, since most of the artists present their work on social media regularly, the buyers are usually familiar with most of the artists’ styles.

Hosting the show in a bar breaks, if not completely dismantles, the distance between the art and its viewer.

“It was very intentional to do this in a club setting. Personally, when I go to a gallery, I get very nervous when there is no sound and everyone’s quiet. I should be able to walk up to the artist and interact freely. The whole idea was to make this a party, instead of being very serious and pretending to understand art,” Romario laughs.

Making it a monthly affair also motivates local talent since there is the assurance of a show space, says Romario. This means, Chennai is likely to see more editions of Optikal Asylum on a monthly basis. Moving forward, they plan to take it to a festival scale, which was initially the plan for 2021, until the pandemic threw a spanner in the works.

“It’s a win-win for everybody. The artists are also not charged rent for the space, and the proceeds from the sales go directly to them,” adds Romario.

GuruOnTime (GOT) is one of the buzziest websites of India that provide you latest news around the World & country. We are continuously working to provide you with the latest information as per the trend and latest happening across the globe.

GuruOnTime (GOT) is one of the buzziest website of India that provide you latest news around the World & country. Guru On Time has several categories that cover all updated information across Trending News, Popular Hashtag, Life, Culture, Technology, Quotes, Entertainment,