Couples who connected despite social distancing and pandemic stress, some forging new bonds, some strengthening relationships, and some rekindling romances “The lockdown was the best thing that happened in our lives,” says Priyanka Deo Jain. She met Ankit Jain at Delhi’s Mughal Garden in February 2020 and married him on June 29. “It feels unreal now! He had first messaged me on Twitter in December 2019 saying he liked my work. The sceptic in me thought he was hitting on me like other guys,” laughs Priyanka, who had returned from the US after completing her studies in Harvard and started her YouTube channel New India Junction where many of her development-themed stories were going viral.

The two discussed work over a couple of coffee meetings, and two months later, Priyanka, was invited as part of a team of journalists to report on the opening of the Mughal Gardens. Her second cameraperson did not turn up. It took her an extra three hours to get the footage, during which time Ankit came to check on the reporter who had stayed on for so long. The conversation was brief and formal.

A week later they met again over coffee. “I was new in Delhi and it was always refreshing to talk to him,” she says. “I found her charming and intelligent and masked my feelings because I did not want to spoil my chances,” he says. A month later, they crossed paths in the Bengaluru airport and dined together. Awkwardly, he’d forgotten his wallet at home and she offered him money to spend, though it made her wonder about him.

Back in Delhi, he did take her out for dinner and repaid her. What changed their lives was a three hour walk around India Gate holding hands and talking endlessly.

When the lockdown intensified in April-May, they dated virtually. Once it was lifted, Ankit visited her often at her home in Gulmohar Park. The duo went for walks in the neighbourhood park and slowly grew into a couple. When she injured her ankle, he tended to her and that set them both wondering about commitment.

“We soon realised we were on the same page,” says Ankit. “We did not even say the three magical words to each other before marriage as everything was so seamless and we were so sure of us,” she says. The wedding was held in the lawns of Ankit’s house with just four people — their parents.

“It was very relaxing and peaceful and saved us time, money, and stress,” says Ankit. Their extended families and friends did not have a whiff about the wedding till Priyanka announced it on her Twitter post a month later. Seven months into marriage now, the couple says, “We would not have wanted it any other way.” “I wanted to have a serious relationship and downloaded the Aisle app, liked his profile and he replied to my ice breaker question,” says Raunak Sharma. Before they knew, they were constantly texting each other over the next 10 days and decided on the first video call on July 17.

“There was a tremendous comfort level from the word go,” says Saurav Sahoo. From that day, it turned into 4-5 hours of daily conversation. For their first date on August 2, she sneaked out of her campus with a friend’s help and they spent the entire day talking, laughing, eating, riding around on his bike.

While dropping her back, he gave her a necklace saying he had purchased it long ago and kept it to give to his first girlfriend. And then he asked whether she would like to follow the app’s tagline — “Delete it forever together.”

It took Raunak a week to process the thoughts and realise how madly in love she was with him. “Everything felt so right and we told our parents in September. Both sides were extremely open and welcomed us,” she says.

She likes his sense of humour and he is in awe of her accomplishments as an academician, athlete, and a dancer. Both describe themselves as two sides of the same personality. “While he is calm and I am short-tempered, both of us are extroverts and ambitious about our careers without being materialistic,” she says. “We constantly surprise and motivate each other,” he says.

Raunak is fond of bikes and the first hug she received from Saurav was on an empty road when he gave her a reverse hug. The adventurer in her was thrilled by this daredevilry. “We complement each other totally,” says Raunak. “I have started believing in destiny after she so smoothly walked into my life,” says Saurav.

The couple is getting engaged on March 19 and the wedding is planned for November. Just before the lockdown Rupali and Hrishikesh met on dating app Aisle. Both were divorced and were on the lookout for a serious relationship. After celebrating her birthday on March 7, when the lockdown caught him off-guard, Hrishikesh was left with no projects and he says the next three months were tough. While he was constantly worrying about earning, Rupali says she was sure about him even though many times it appeared they were on the verge of a break-up.

He is reticent and does not like having long chats over phone and the inability to meet him in person and comfort him was frustrating, she says. The day lockdown was lifted, Rupali booked a cab and went to meet him and his parents in Pune. “They were very kind and open and asked me to think cautiously as he did not have a permanent job. I left after saying, ‘I love you.’ He did not answer,” she says.

When he got back to Mumbai, they went out to dinner, and Rupali gave the bartender a ring to put it in his cocktail. “I was waiting excitedly for his reaction and he had such a weird expression on his face when he saw the ring and actually thought some waiter’s ring had accidentally fallen into the glass!” laughs Rupali.

Back home, she formally proposed, and decided on a simple court wedding on December 7. “We complete each other.I realised both of us wanted the same things from life, simplicity and to be able to fulfill our basic needs,” she says. “I always had a fascination for Mumbai and now we have rented a house here to lead our lives together. I admire her boldness and how she chose her work and me,” he says.

If silence and long distance held us together, we can tide over any crisis,” adds Rupali. “True love lasts, and the pandemic taught us that,” says Hrishikesh. 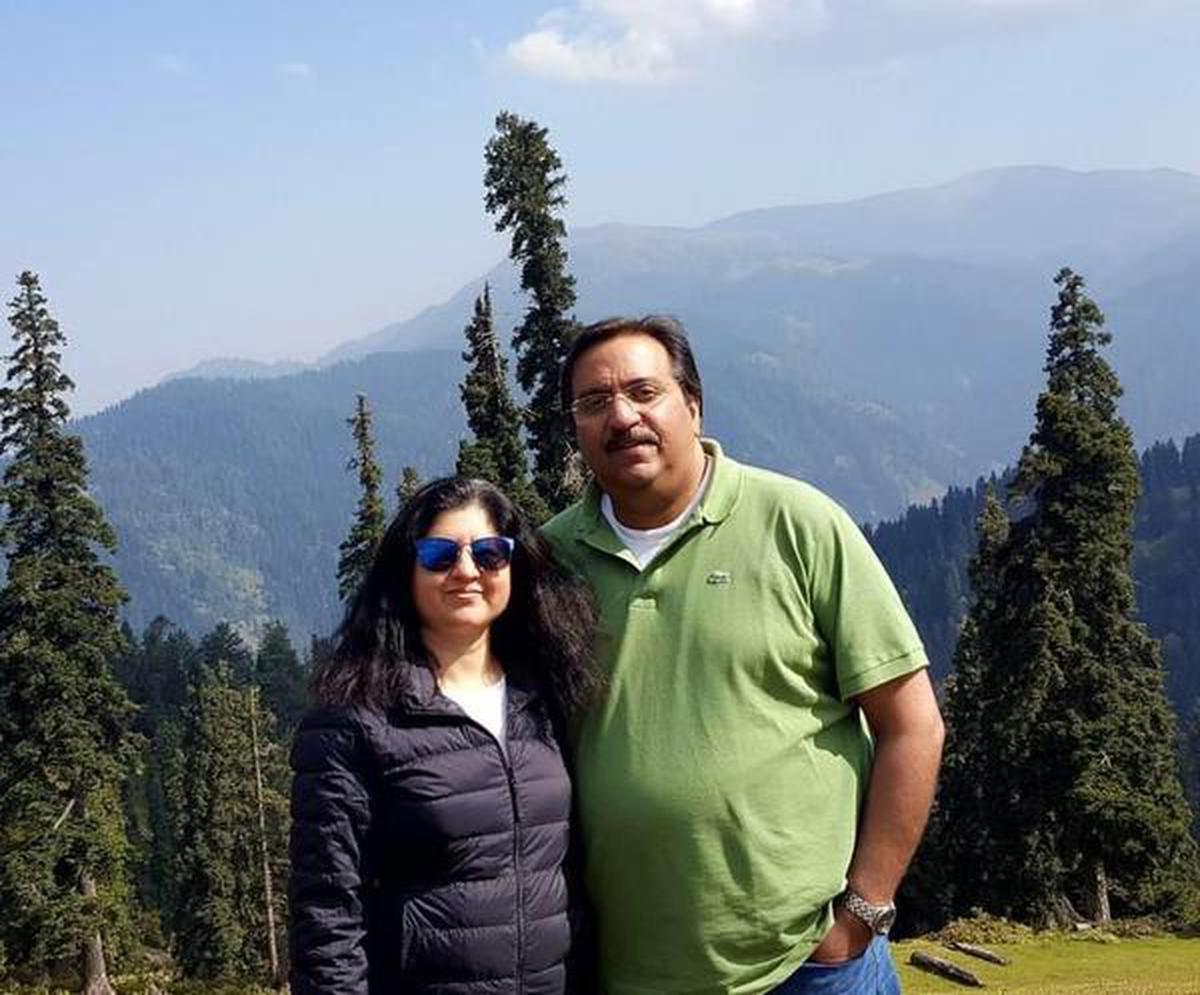 This pandemic and subsequent lockdown has been hard on everyone, but it has had some positives. For a housewife like me, life was a series of mundane activities punctuated with travel that I love. Being married to a workaholic didn’t help.

Vikas and I met in college and fell in love. Two kids and 28 years later we had fallen into a rut. Everything was adjusted for work including our vacations. I don’t remember a time when it was only us talking and having fun. We even had a third ‘person’ on our 25th anniversary celebrations — his work.

With the lockdown we were suddenly home all the time — no distractions, no visitors, nowhere to go and most importantly no work. With four adults in the house, work was relatively easy and soon both of us gravitated towards what we loved: food and drink.

The day was spent planning what to cook and which cocktail to make. Having a background in hotel management made it easier. Cocktail hour was at 5 pm, with videos being made and even appearances by my elusive introverted son.

The next couple of hours were spent on the balcony talking, really talking. We started to rediscover each other and enjoy our time together. Vikas was never very expressive about feelings and I had long given up planning special dates.

It was nice to realize that our love was still strong but more importantly, that we liked each other. Another 30 or so years with him seem nice.

We have shifted houses in the last couple of months and though the office is back on four days a week, we still follow the routine of sitting on the balcony, talking and laughing.

I haven’t travelled at all since the pandemic started and that’s not normal for me. But I’m ok with that. It has given me my relationship back and that has been the best thing ever.I hear stories of people struggling mentally in this lockdown and I’m so grateful for what I got out of it.

GuruOnTime (GOT) is one of the buzziest websites of India that provide you latest news around the World & country. We are continuously working to provide you with the latest information as per the trend and latest happening across the globe.

GuruOnTime (GOT) is one of the buzziest website of India that provide you latest news around the World & country. Guru On Time has several categories that cover all updated information across Trending News, Popular Hashtag, Life, Culture, Technology, Quotes, Entertainment,